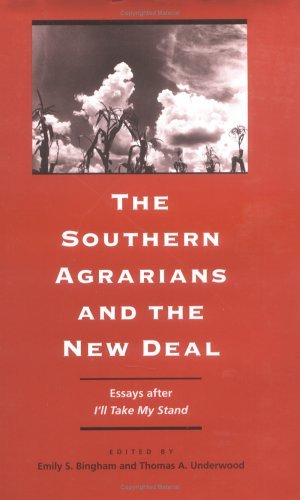 The Southern Agrarians and the New Deal

Essays After I'll Take My Stand

(Edited with Thomas A. Underwood)

“Historians usually think of the Agrarians as nostalgic literary men, whose manifesto, I’ll Take My Stand, expressed their longing for a restoration of the Old South. But this important book requires us to reconsider the Agrarians as genuine American conservatives. After a brilliant introduction that evaluates the extensive literature on the subject, Bingham and Underwood present significant statements by the leading Agrarians during the New Deal period to show how they put aside their aesthetic and philosophical concerns to draft government policies and offer a broad vision of an organic society.” – David Herbert Donald, author of Lincoln